My name is Jollie Harris Ill. I was born in 1955 and raised in St. Louis Missouri.

Thank you for taking your time to hear

a story about a little boy raised in a sterile room, and in a totally sterile environment.

My  childhood  and  life  began  pretty

much as a happy playful little boy, who was always running and hiding from bacteria. Dirt and just about any particles that flow through the air could make me sick.

began. I was about six months old and ate a very dangerous poison called Red Devil Lye. It was 100%  pure. Lye in those days was known to be one of the deadliest poisons on earth - and it still is.

Lye is equivalent to liquid acid, but ten times stronger. It was used in many things such as Easy Bake Oven Cleaner, most

Nowadays, the  school system has taken out all the old playground equipment and replaced it with new equipment that is not lye-based.

would always say to Jethro, "I'm going to wash your mouth out with lye soap." I think you Baby Boomers out there like me will remember that episode. Red Devil Lye if poured on concrete will burn a hole straight through, and you will see the smoke rising as it burns.

Just to give you an example of what

the lye did to me when I was a baby - A mistake was made where my baby sitter and      a    family    member    were    being distracted. Somehow I fell out of the bed and crawled into the room where the family member was cleaning the floor with Red Devil Lye, I knocked over the can,  and licked the floor. This caused me to be rushed to the hospital to begin one of the most complicated surgeries in history and of my life.

The lye ate up and burned out my entire throat. My esophagus was gone

Finished the   lye   had   burned straight

through. The doctors had to rebuild and recreate my esophagus/throat in order for me to survive and stay alive.

I had a very good doctor. He told me

later in life that I was the very beginning of his  ear,  nose,  and  throat  career,  which made  him  very  successful.  He said  that God and God only pulled him through this operation. Thank You God for your Guidance of the hands of Dr. Gladny and Dr. Bond during this operation.

The lye that I ate just so happened to have a large picture of a Red Devil's face on the can. I WILL NEVER FORGET IT!

Dr. Gladny later told me that he had in the past only operated on frogs. He called me  The  Miracle  Boy! I lived  in  a  sterile room where I could never come out. Maybe for about 5% years I lived there, total.

This is a place where some of the kids would get to go home on holidays or birthdays, but sad to say, I could not go and enjoy a day in life as other kids could. I was not expected to ever talk, do sports, to sing, dance, or anything else.  I had many allergies at that time. I was allergic to just about everything and I had a very nervous

stomach which was easy to upset. Anything that I ate would upset me in some kind of way. I could not swallow food.

My mother would come to the hospital everyday to visit me;  she  would put her

would talk to each other. I remember my feelings when I was four years old. It was cold in the sterile rooms; that's because bacteria feeds on heat and makes it grow faster. The glass I put my hand on felt cold to my heart knowing that I could not hug my mother on the other side of the glass.

because I could  not  go  home  with  my

mother.  In this  home, I had  two  strings coming out of each of my nostrils, tied to

holes in the cartilage of my nose to keep the plastic tubes placed in my throat. These tubes   were   to   force   a   reconstructed

opening in my throat where Red Devil Lye Poison had burned and ate up my esophagus.  I looked like  a  catfish  with

tubes in his throat, and that is just what the kids called me--Catfish.

The little girls would get their fingers tangled up in my strings and it would make me cry. I could feel the plastic tubes in my throat being yanked up and down as little girls   accidentally   got   their   hands   and fingers caught in my strings. While playing I tried to have fun, but it was difficult.

My food was placed directly into my

stomach by opening a piece of plastic and then sealing it tight to keep air and bacteria from getting in. The nurse would open the plastic, stick the food straight into my stomach, then the nurse would seal it tight and that's how I ate for many years with no food ever entering my mouth. The sense of taste was one of the five senses that I lost during those years. Sometimes air pockets would get into my stomach and made my stomach very nervous and upset. It felt like many heart attacks happening at the same time.

For the most  part, all  of my  nurses

were Catholic Nuns/Sisters, who worked at the Children's Hospital where I lived. These nuns  and  nurses  wore  long  black  robes

with white hats that looked like they could fly. I called  all  the  nuns  in  the  hospital momma, maybe because I saw them every day. In my mind they were my mom, even though I did have a very good relationship with my mother whom I saw on a regular basis.

I really  want to  send  special

appreciation from my heart, to all the Nuns

I Sisters I Nurses and Doctors that were

there for me and helped me to recover. I also want to say thank you to the family members of those Nuns because they also share the same love  and blood of these God Gifted people. Catholic Nuns I Sisters are God's chosen people. Nuns are some of the greatest people on the earth and still today have not achieved the respect, honor and   recognition  that   they   so   rightfully deserve from the American public. America should celebrate the Nuns and make A Day for Nuns a national holiday.

countless hours of volunteer work - also helping and assisting the Red Cross for many years. I just want to say thank you God for sending your angels to earth, the

Nuns I Sisters! I love you all so much, may

God keep on blessing you.

I would also like to acknowledge, say thanks, and pay a special respect to the Red Cross for the many years and days where your volunteers have lifted my spirit and heart doing their very best to assist me in  any  and  every  way  possible.  Mainly

keeping me happy through the most difficult time of my life.

there will understand why it is so important for me to be your servant. Life is a cycle of circles   and   I   must   give   back  to   the universe. I pray that God will bless the Red Cross and everyone involved. My mother would come and see me every day.

In the hospital is where I started to learn about germs. Because I could not eat through  my  mouth  or  use  my  throat,  I

gained a very high keen sense of smell and sight.

I could smell and see bacteria in the air which might sound impossible. I would

know when there was dangerous bacteria in my air space, simply by smelling it.

By six and seven years old I was able to talk fluently without pain. Thank God, finally, I could get out of the cold sterile room and could go home. Every year of my life after that till I was 21, I had to go back into the Hospital right when school was letting out for summer break and get operated on again. It took up my whole summer vacation. I remember trying to run away at the last day of school every year.

My parents would come to the school early on those days to put me back in the hospital. My dad was forced to grab me by my shirt collar as I tried to run away. I got very tired of having operations. All of my operations started off with a gas mask placed over my face as the doctors turned up the gas called ether. After my eighth or ninth surgery the gas/ether was not doing the job of sedating me or knocking me out as you would call it. So the doctors turned up the gas even more.

Many  times  I physically  fought  the doctors and nurses in the operating room. They taped me to wooden boards attached to the surgery bed and I looked like Frankenstein with needles poked into my

PROPHET JOLLIE, DOCTOR OF THE CHURCH, THE MOST KNOWLEDGEABLE HEALER SINCE YESHUA/JESUS.

OVER 1,000 DIFFERENT HEALINGS ARE WORKED THROUGH HIS HANDS!

HOSEA  4:6 my people are destroyed from lack of knowledge. 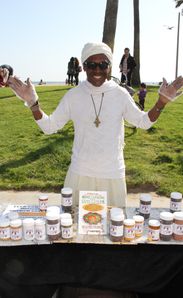 SPECIAL HELP FOR THOSE

BEHOLD I STAND AT

THE DOOR AND KNOCK !